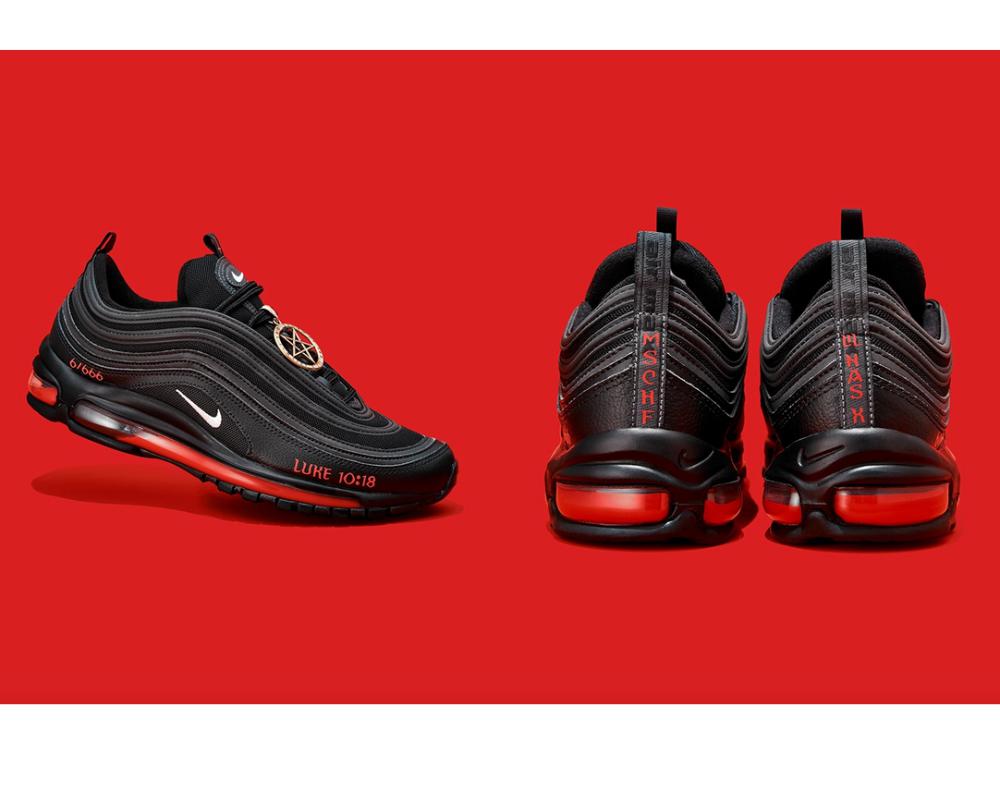 (CNN) -- Rapper and singer Lil Nas X released a controversial pair of "Satan Shoes" featuring a bronze pentagram, an inverted cross and a drop of real human blood, and they sold out almost immediately.

The black and red sneakers, part of a collaboration between Lil Nas X and New York-based art collective MSCHF, were made from the Nike Air Max 97, though the sportswear brand has distanced itself from the design.

In a statement emailed to CNN, Nike said it was not involved in creating the modified shoes. "We do not have a relationship with Lil Nas or MSCHF," the company said. "Nike did not design or release these shoes and we do not endorse them."

MSCHF confirmed via email on March 29 that all 666 limited-edition pairs sold out in less than a minute (although Lil Nas X will keep the first "Satan" pair, MSCHF creative director Kevin Wiesner told CNN.) .

They were priced at $1,018 a pair, a reference to the Bible passage from Luke 10:18 which says, "I saw Satan fall like lightning from heaven." The air bubble sole of each shoe contains 60 cubic centimeters (2.03 fluid ounces) of red ink and "one drop" of human blood, according to MSCHF.

An MSCHF spokesperson said the blood had been provided by members of the art collective, adding: "We love to sacrifice for our art."

Wiesner later explained in a video call that the creative team collected individual drops over the course of a week using the same type of needle used in home glucose tests. The group also confirmed to CNN that Nike "was not involved in this in any way."

The shoes sparked outrage online over the weekend and drew criticism from a number of high-profile political and religious figures, including South Dakota Governor Kristi Noem and evangelical pastor Mark Burns. The latter said in a tweet that the shoes were "evil" and "heresy". Meanwhile, some fans of the "Old Town Road" rapper tweeted their support and desire to own a pair.

In response, Lil Nas X (real name Montero Lamar Hill), posted a video on his official YouTube account titled "Lil Nas X Apologizes for Satan Shoe" which has now been viewed over 1.8 million times. . But after a few seconds, the apparent apology cuts to a scene from his new music video, "Montero (call me by your name)," which shows him dancing provocatively with an evil character. The rapper is then shown breaking the devil's neck, before removing the horned crown and putting it on.

The day after Lil Nas X released the music video, he responded to the backlash over rebellious religious images of him. "I spent my entire teenage years hating myself for the *** s*** you all preached would happen to me because I was gay," he wrote. "So I hope that they are angry, and that they stay angry, they feel the same anger that we were taught to have towards ourselves."

LOOK: Rapper launches sports shoes based on a Nike model and inspired by Satan that contain human blood

The collective that Lil Nas X worked with on "Satan Shoe," MSCHF, is known for its irreverent "drops," a series of tongue-in-cheek art projects that take place once every two weeks. In 2019, the collective released a limited edition "Jesus Shoes," also made from Nike Air Max 97 sneakers, which featured a steel crucifix and "holy water" sourced from the Jordan River.

Other such launches have included selling a laptop installed with some of the world's most dangerous computer viruses for more than $1.3 million. Meanwhile, in February, the group trashed four Hermès Birkin bags to create a collection of sandals. priced between $34,000 and $76,000.

"We all knew that some people would take the satanic element of this seriously ... but I'm not sure we were fully prepared for the furor it would cause," Wiesner said. "Obviously, from our perspective, it's just fun, right? There's a wealth of symbolism to work with, but some people have taken that to heart."

He referenced a YouTube reviewer, Michael J. Mitchell of the "A Sneaker Life" account, who first made an unboxing video and then posted a follow-up video called "I threw away the Nike Satan shoes." He did it, Wiesner said, "because his fans had reacted so badly to the concept, which is extremely funny."

In the 8-minute video, Mitchell announces that he's getting rid of the sneakers before throwing them down the garbage chute at his apartment building (he shows them in the box before they come down). "I'm throwing them straight, brother. I don't want to keep this energy around me at all," he said. "Everyone just relax, brother. I'm a man of God."